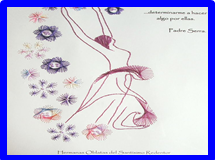 ON GUATEMALAN GANG TURF, OBLATE SISTER REACHES OUT TO WOMEN IN PROSTITUTION

A few blocks from the public square in Guatemala City, the area along the city's abandoned, weed-covered train tracks has become its red-light district, La Línea.

The area operates with tacit impunity: Gangs control various sections of the neighborhood, which is ripe for drug deals and prostitution, with the confidence of local police officers. Door after door lines the strip, each leading into tiny bedrooms where young women sell themselves for about 70 quetzals, about $9, an hour.

Though common knowledge warns against anyone wandering into the district — even driving by is considered dangerous — Sr. Angélica Segoviano, an Oblate of the Most Holy Redeemer, has gained daily access by establishing trust with the women she visits. The gangs that control the turf allow her unsupervised access, thinking she's lecturing the women on sexually transmitted diseases.

Around half (51%) of trafficking victims in Central America are girls younger than 18, according to a 2016 United Nations report, with sexual exploitation constituting 57% of trafficking crimes. Gangs, crime families and drug traffickers tend to run the sex trafficking rings.

"The women have to wait for clients without any security or assurances because anything goes in this part of the city," Segoviano said. They rent their beds for about $6.50 a day in addition to a "protection fee" that gang members demand; failure to pay can cost their lives.

It takes time before the women on La Línea open up to Segoviano about their lives and worries, their initial suspicion born of the fact that some have gone years without anyone simply asking how they're doing, she said. A common thread among the women is a history of sexual abuse, often by a family member; many have told Segoviano that she is the first person in their lives to believe them when they say they've been raped or abused.

'With time, everything gets easier'

Wendy Cadina, now 45, never forgot what it felt like the first time she sold her body for sex. She was in pain, feverish, her whole body aching.

She had left her abusive husband in Honduras and planned to go to the United States with her two children to start a new life. Because she ran out of money, Cadina settled in Guatemala, where she was told she could work as a dishwasher without paperwork.

"With time, everything gets easier," she said. "Yes, I suffered a lot in the beginning. But then I would think, what's waiting for me back in my country? A husband who wanted to kill me? I would tell myself, 'Better to work here than being there.' It was hard, but I don't regret a thing."

Cadina no longer sells sex by the train tracks, and instead finds customers by loitering in local parks, sometimes making up to $180 a day.

Though she saves money by not having to rent a room from a gang member, she said she faces other dangers being on her own. She's been beaten, robbed and held at gunpoint, "but the scariest one was the rape, because I could've caught something. That's my biggest fear. Not the violence, but catching a disease and becoming less desirable."

A few times a month, Segoviano visits Cadina in the park just to chat, having met her three years ago when Segoviano brought her chocolates.

"She keeps telling me that if I want to find another job, she can help me," Cadina said, particularly finding work as a massage therapist where Segoviano has contacts.

Though Segoviano's daily ministry visiting women in prostitution is done solo, the Central American anti-trafficking network of women religious, Red Ramà, provides her and other sisters in this ministry with training and formation, including news and information on the issue in her region.

In the last few years, Segoviano noticed an increase in young indigenous women among those trafficked in the brothels, a trend she attributes to the ease with which they can be lured from their families.

When parents are told lucrative opportunities await their daughters in the city, they are eager to send them away with the messenger and expect them to send money home from the city. For that reason, Segoviano said part of the prevention work against trafficking should include educating indigenous families.

Once the young women, many of whom don't speak Spanish, are taken into the city, Segoviano said, they're initiated through some form of labor trafficking, working grueling hours for no pay to break them down. Then the women are told that they have a "promotion," in this case, transitioning into sex trafficking.

They're given clothes to change into and are expected to take on clients in bars, canteens, brothels. They're promised they'll be paid in U.S. dollars; they're not. Still, the pay is tempting: In prostitution, they can make $7 to $10 an hour. Washing dishes, they make closer to $2.50 a week.

Eventually overcome with shame, the women choose never to return home, Segoviano said, cutting themselves off from their families, who are convinced they're working fancy jobs in the city.

"They start very young, maybe 9 years old, and all of their sexual experiences begin with rape," Segoviano said. "Not one girl who I've spoken to hasn't been raped or experienced sexual abuse in her family — grandfathers, fathers, stepfathers, uncles, older brothers. It's an incredibly misogynistic culture, and we have a lot of work to do on education and prevention."

'The sisters would lift me up'

Jenny was 8 years old when her father began molesting her. After her mother left him and remarried, the new stepfather also abused Jenny, who chose not to give her last name because of her sensitive story.

But this time, when Jenny told her mother about her stepfather, her mother chose him, leaving Jenny's grandmother to raise Jenny and her two siblings.

Then there was her uncle.

When Jenny was 17, she and her sister babysat her little cousins during the day at her aunt's house. Eventually, they started sleeping over, and her uncle — whom she purposely avoided — would offer her and her sister tea before bed to help them sleep, which they noticed made their mouths feel numb.

A few weeks later, Jenny was vomiting and wondered if it had to do with the tea. She said she "felt dirty, the same kind of feeling I would have after my father or stepfather touched me. I would shower and still feel dirty.

"When my aunt took me to the hospital, they asked me if it's possible I was pregnant, and I said no. Even after my father and stepfather, I was still a virgin."

Six months later, she learned she was, in fact, pregnant. Jenny knew it could have only been her uncle. She chose to keep this information secret, which only amplified her family's accusations that she was sleeping around.

For years, she hated her baby, neglecting, hitting, yelling at him that she wanted him to die, rejecting his hugs and kisses.

"Nothing was his fault, but I couldn't even bring myself to look at him," she said.

Around this time, Jenny was visiting Grupo Dorca, a program for women who have been prostituted or abused, where they learn crafting skills and sell products for income. The Oblates of the Most Holy Redeemer founded the group in 2010, and Segoviano now runs it.

Dorca's goal is to offer an economic alternative for women who have chosen to leave prostitution or abusive households. Though the group doesn't have resources to offer the women a place to sleep, they have a place where they can study, as well as access to a doctor who treats them and their children for free.

When Jenny's son almost died at age 3 after weeks of being sick, her main support system at the time was the sisters she knew through Dorca, which she found through a friend who shared a background of abuse. And while she recalls those weeks as "desperate" and guilt-ridden, feeling like she had "taken advantage of the time they had together," the experience awakened her desire to be a good mother, she said.

"Now, we have a better relationship, but it cost us to get there," she said, adding her now-5-year-old son accuses her of denying him a father or lying about not knowing who he is.

"I know what I'm capable of, that I want to be a good mom," said Jenny, now 23. "I have confidence in myself now that I didn't know I'd ever have. If I found myself in a slump, the sisters would lift me up."

Though Jenny's involvement in Dorca was on and off for six years, she now participates regularly.

Many of these women, either the ones Segoviano visits in La Línea or who come to Dorca, have tried to kill themselves. Jenny has already survived two suicide attempts, Segoviano said, swallowing pills she later threw up at the hospital.

Today, Jenny is taking classes, crediting Segoviano for putting the thought of education in her head and reminding her that it wasn't too late to start studying again.

"Remembering how broken Jenny was when we first met, and to see her now put one foot in front of the other, learning how to write her name, telling me she wants to live — it's all worth it," Segoviano said.

But her spiritual practice is what fuels Segoviano, she said. She dedicates time every day to a space for silence, prayer and reconciliation.

"I am among so much pain and abuse, exhausted by the extreme inequality and injustice that I see, that I also need a place to recharge and remind myself that maybe I won't see the fruits of my ministry. Maybe I won't get to see that girl again, but I was with her at least once and made her feel heard."

"I thank God that I am his instrument, that I can accompany her, listen to her, and push her to get up," she said. "But the only one who can make that decision is her."